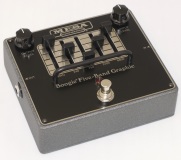 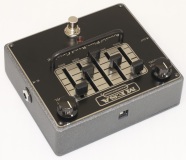 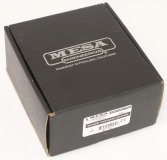 SKU: MB-4007
$279.00
$279.00
Unavailable
per item
Check out Mesa/Boogie's Five-Band Graphic EQ!
3 available
Add to Cart
DESCRIPTION
The legendary Boogie Five-Band Graphic EQ is now available in a Pedal! For well over four decades the Boogie Five-Band Graphic EQ has been at the heart of chart topping guitar sounds and it’s hard to ignore the impact its now-classic “V-Curve” has had on modern guitar sounds and popular music. Now we offer this powerful tool in a stand-alone pedal format that packs the same tone-shaping power and hand-built in Petaluma, CA quality as those found in our high-end amplifiers.

In the early ’70s Boogie sounds were most associated with singing, vocal-inspired lead work as Artists learned the newfound possibilities of its high gain tube preamp and it’s game-changing sustain. The Graphic EQ aboard most fully loaded “Hun-Revs” of the day found their sliders set for a subtle widening effect or enhanced Bass response to mimic bigger cabinets with the little 1x12 combo. As the era of Classic Rock faded and the dawn of Metal appeared on the horizon in the late ‘70s and early ‘80s, the potential power of this on-board tool began to be fully realized. Graphic-loaded MARK II™ Boogies became the norm and most of these on-board EQs were used to scoop the mids to extreme levels while boosting lows and highs and this “V-Curve” became a new standard... the “other sound” (non-Brit) in Hard Rock and Metal.

Since then, MARK III, MARK IV and MARK V Boogies all have their place in Rock history through iconic Artists and the Graphic EQ has been an integral part of their sound. The Five-Band Graphic EQ aboard the current MARK V Boogie is again at the forefront of emerging styles as a whole new generation crafts their own unique brand of heavy sounds in Djent and Nu-Metal genres.

You can incorporate this powerful shaping tool into any setup (including non-guitar applications) whether in the Front End or in an Effects Loop and create your own unique signature Tones. The same long-throw Sliders are used to achieve maximum resolution and finite adjustment. Both INPUT and OUTPUT LEVEL Controls are fitted to ensure optimum matching of both your Source and Destination regardless of your application. Whether used in front of your amplifier’s Input or in your Effects Loop, it gives you a footswitchable Tone option you can employ on demand. And when it’s not engaged, your sound is pure and unaltered thanks to the Hard Bypass Feature.

The Boogie Five Band Graphic runs on one 9 Volt battery and can also be powered by a standard DC Wall Transformer. This affordable package brings the power of the Boogie Five Band Graphic and its classic “V-Curve” Tone – as well as near-limitless other Tonal possibilities – to players of all experience levels, musical needs and amplifier brands in a small, pedal board-friendly format that’s handcrafted in the USA using the finest materials. Boogie-ize your rig!

NOTE: Mesa/Boogie products are only available to buyers who 1) are residents of the United States, 2) have a U.S. shipping address, and 3) have a U.S.-based method of payment.